Well, this morning I found in my inbox an announcement for an intriguing conference on "Political Emotions: A New Agendas Conference" being held at UT-Austin this weekend. The keynote is Lauren Berlant, and features some major queer thinkers, including Gayatri Gopinath and Heather Love. I knew something like this was in the works, but wish it was later! Sadly, I'll have to miss it to attend another fantastic conference, SEMA.
Posted by Nic D'Alessio No comments:

Well, it's been entirely too long since I posted or commented on anything. Been utterly swamped with finishing projects, TAing an ethics course for the philosophy department, and preparing for SEMA (more to come on that front).

mber a special session on the book at last year's Medieval Congress in Kalamazoo. My review will appear in the "Books in Brief" section of a forthcoming issue (I think the next one) of GLQ: A Journal of Lesbian and Gay Studies. It was a real delight and incredibly insightful to work with the book review editor, Beth Freeman. I'm posting the review below, although it's possible that changes might still (need to) be made. Generally, I thought the book was really great, but I did have some theoretical concerns/questions. In fact, at the Kalamazoo BABEL party I had the pleasure of meeting and talking with Marilynn about the book, and she was incredibly gracious toward me. That was certainly a delight!

After California’s Supreme Court extended marriage rights to same-sex couples regardless of state residency, The Advocate declared open season on the “Great Marriage Rush.” Featuring white-gowned and black-tuxedoed couples and the Golden Gate Bridge, the cover conjoined a homonormative rights agenda with a pioneer rhetoric of individual freedom and hard-won riches.{1} Advocating a pause before this juridical embrace, some theorists argue for a disarticulation of marriage practices from kinship structures.{2} But another potential lengthening of this respite emerges from scholarship on premodern literature, which continues complicating our easily drawn assumptions about past and present marriage politics.{3} Offering such breathing space, Marilynn Desmond’s Ovid’s Art and the Wife of Bath examines Ovid’s medieval reception in Heloise, the Roman de la Rose, Chaucer, and Christine de Pizan.

Much merits comment in Desmond’s study. Both the archival survey of medieval French translations of the Ars amatoria and the excellent treatment of Christine’s source-relations prove essential. Parsing Chaucer’s reliance on the “mounted Aristotle” for his Wife of Bath’s cultural legibility, Desmond also examines how Chaucer uses first-person confessional structures to establish the Wife’s authority. A fuller appreciation of Chaucerian discursiveness emerges from Desmond’s genealogical tracing of the Wife through the Roman de la Rose: precisely when the Wife seems “most personal or authentic” she is “most constructed” (125). Throughout, Desmond enacts a disciplinary capaciousness alongside a remarkable facility with a temporally diverse set of multilingual texts. (Such comparativist strengths could have been better displayed with a comprehensive bibliography.)

Some readings will rub specialists the wrong way. But more pressing is the disjuncture between theoretical languages and very exciting textual work. Desmond rhetorically frames her study with S/M’s potential to disrupt heteropatriarchy by staging “problem[s] of ethical negotiation” (2-3). Left undeveloped is her intriguing description of much S/M writing “read[ing] like a rhetorical manual” (4). Still, it seems that S/M appears only long enough to conjure its opposite in domestic violence; wife-beating, not the desexualizing intensities of S/M, is key for her argument.

Another concern is how Desmond uses heterosexuality. While sometimes highlighting its performativity, Desmond nonetheless uses heterosexuality interchangeably with heteroerotic and heterophallic, which conflates sexuality and gender within a hetero/homo frame. Conceptual dependency on such a capaciously normalizing category essentializes a discursive effect. By laminating heterosexuality onto a premodern past, as James Schultz argues, scholars allow it to “escape history” and assume a “cosmic and inevitable” status, thereby contributing to both the term’s colonization of the past and its consolidation in the present.{5} If Desmond relentlessly trains our eyes on discomforting scenes of erotic violence to demonstrate both their invitation to “ethical reading” and the presence and power of “textual violence in the disciplinary acts of interpretation,” then conceptual reliance on heterosexuality does its own discursive damage by foreclosing the sexual field within hetero/homo or conjugal frames (9).

But such criticisms cannot devalue what is an otherwise excellent and thrilling treatment of Ovid and his medieval appropriators. Argumentatively compelling and accessibly written, the book is also handsomely produced, with 37 illustrations. Specialists will benefit much from Desmond’s strengths in dealing with manuscripts and premodern rhetorical and pedagogical traditions. But queer readers might take away from Desmond a disquieting problematization of marriage: If the West remains heir to an “Ovidian libidinal economy” whereby the institutionalization of marriage not only “structures eros” but also “elicits and regulates violence” (64, 29; 116), then it seems all the more vital to not rush toward but interrogate whether these bonds are irrevocably pathological. Perhaps, then, the medieval never feels more modern than when asking, “Who’s on top?”

Nunzio N. D’Alessio is Ph.D. student in English at The University of Texas, Austin.

___________
{1} To view the cover image, see: http://www.advocate.com/toc_ektid1010.asp (accessed 16 September 2008). The California Supreme Court’s 4-3 decision, which overturned the state’s existing ban on gay marriages, was handed down on May 15, 2008 and took effect on June 16, 2008.
{2} See, e.g., Judith Butler, Undoing Gender (New York: Routledge, 2004). I remain particularly indebted to Butler’s theory of agency, as recast here, for several of my below critical formulations.
{3} Emma Lipton, Affections of the Mind: The Politics of Sacramental Marriage in Late Medieval English Literature (Notre Dame: University of Notre Dame Press, 2007) and Frances E. Dolan, Marriage and Violence: The Early Modern Legacy (Philadelphia: University of Pennsylvania Press, 2008). Both Lipton and Dolan situate their work with respect to contemporary marriage debates.
{4} That Christianity’s relation to erotic domination between spouses is a more ambiguous phenomenon can be glimpsed in the writings of John Chyrsostom, whose often noxious treatment of women still disallows domestic violence—a condemnation far stronger than his contemporary Augustine. See Joy A. Schroeder, “John Chrysostom’s Critique of Spousal Violence,” Journal of Early Christian Studies 12.4 (2004): 413-42.
{5} James A. Schultz, “Heterosexuality as a Threat to Medieval Studies,” Journal of the History of Sexuality 15.1 (2006): 14-29 at 20. Briefly, Schultz taxonomizes heterosexuality in three ways: as naming discrete sexual relations between men and women, claiming an orientation or identity, and describing a regulatory institutionalization. This tripartite taxonomy causes damage, argues Schultz, through correspondingly reductive analyses that make heterosexuality isomorphic with reproduction, psychosexual integrity, and marriage. The article also appears as chapter four in Schultz’s Courtly Love, the Love of Courtliness, and the History of Sexuality (Chicago: University of Chicago Press, 2006). Schultz is certainly not alone in questioning the signifying capacity of heterosexuality, on which see Graham N. Drake, “Queer Medieval: Uncovering the Past,” GLQ 14.4 (2008): 639-58.
Posted by Nic D'Alessio 3 comments:

A Future to Defend?

Over at ITM the past few days, there's been a really generative and stimulating discussion on "defending" medieval studies. The conversation was prompted by JJC's posting of a missive he received soliciting some advice. What was intended to be and initially prompted more pragmatically focused discussions quickly became a more wide-ranging conversation not just about the institutional prospects of medieval studies but about the very morphology of a futural frame. This was itself prompted by JJC's own rearticulation of the missive's concerns in the form of "the existential question: why must we be?"

I made a few contributions to the conversation, in which I tried to discuss how academic norms not only govern and normalize but also delimit the field of intelligible action/knowledge/pleasure and the viable ways of living such delimited fields enable and sustain. My suggestion was for a strategic engagement with such norms. Readers familiar with Judith Butler's work will quickly recognize its formative impact on my thinking in this area, especially as she's raised such concerns in Undoing Gender. I especially recommend reading Eileen's two amazing comments/posts. But here are just a few tasty morsels of that conversation:

JJC's institutionally tested wisdom:
Eileen's joyful prospectus on curriculuar/institutional arrivants:
Karl's rhizomes of academic desiring:
Mary Kate on how life in the university is predicated on forms of belonging, of being-together.

Holly Croker's timely remarks on the problematic tendency to "conflate period, time, and field," and how difficult but necessary is the challenge to think outside narratives of linear progression.
And the conversation continues there ...
Posted by Nic D'Alessio No comments: 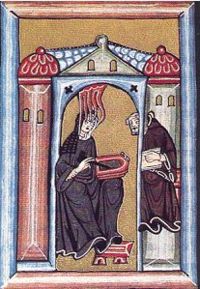